Installment #3 in the “World City Profiles” series, which explores urbanization at the international level.

Like a majority of Latin America’s most important cities, Queretaro is situated at a high elevation in order to cancel out the perennially hot and humid elements of climate normally found at this latitude. Outside of the showery summer season, there is a preponderance of mild, sunny days with bougainvillea blooming year-round.

The city’s early economic growth came with the success of its renowned glass-making industry, which continues today. Though most people from other countries have never heard of Queretaro, its continued and growing position as a destination city is assured by its rising fame within Mexico. Indeed, foreign tourists (like me) who had not known of the very existence of this city are discovering for themselves the authentic urban Mexico found here but lacking in the nations’ famous resort towns.

Queretaro, population 800,000, is the fastest-growing city in Mexico that is not a resort or border city. Its status as the ‘crossroads of the nation’, and its proximate location to the enormous national capital – Mexico City – will ensure economic expansion for many years to come. Moreover, the growth of the aerospace industry has spurred a burgeoning business climate. Dozens of companies from Mexico and overseas have moved operations into the area, drawn by the proximity of associated industries, the state’s tax incentives, and the numerous positive features of this under-rated city.

The fast rate of growth and total reliance on fossil-fuel based transportation – automobiles and buses – has brought with it the evils associated with sprawl. The city is ringed by traffic jammed freeways and the narrow streets of its historic core become clogged with polluting automobiles at peak times, whose frustrated drivers often resort to uncivilized, prolonged horn-honking.

In 1996, a portion of the city’s large historic center became a UNESCO World Heritage Site, thanks to its collection of well-preserved baroque structures and plazas. Indeed, the National Geographic society named the city’s historic area one of the 15 best in the world. Besides the numerous temples of various and beautiful designs, and a healthy dose of pretty and inviting plazas, virtually the entire zone is characterized by attached, one-story rendered, reinforced brick or block construction built in the 17th and 18th centuries.

It is at once a tranquil and captivating experience to explore its cobblestoned, grid-patterned lanes and streets. Behind many of the high-arched portals are interior, open-air courtyards serving a plethora of purposes such as school yards, gardens, cafes, and markets. With every low-density vignette I saw walking through central Queretaro, my imagination conjured pictures of multi-story, infill development that could ease the stress of ongoing population growth. Besides reducing demand for space on overburdened roadways on the outskirts, central densification could be a catalyst for high quality transport and people-centered street design. Such infill development is possible in the central city, even in the expansive historic district, so long as the affected properties are not designated historic or UNESCO properties.

The local office of UN-Habitat is working with the city on the identification of sustainable development goals through a strategic plan known as the Q500, set to run until 2031, the 500th anniversary of the city’s founding. Containing much of the future growth within the existing footprint of the built environment is one of the guiding principles behind the Q500. In the past 47 years, while the population has increased by over 400%, the urban land area has ballooned by a whopping 918%.

Despite state and federal policies favoring sustainable growth in urban areas, private developers are still incentivized to build walled, car-based communities outside of the established urban area. Furthermore, the momentum of Queretaro as a commuter city for the past half century has directed its development patterns outward, along highways.

Regardless of whether Queretaro’s growth up to 2031 turns inward or continues outward, the quality of living in the city itself could be improved with comprehensive active transportation and complete streets infrastructure that reprioritizes its narrow and attractive streets to favor pedestrians, bicyclists, and high-quality transit. This is among the stated goals of the local UN-Habitat office and the Q500 plan, both of which hope to improve the already-great historic bones of Queretaro.

[This is installment #3 of the “World City Profiles” series, which focuses on international urbanization. The first two series articles were about Havana, Cuba (here and here) All photos in this essay are by Chris Berggren, an international traveler who owns an urban photography media company called Active Living Photography.] 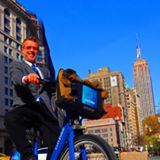 I am a photographer and writer focusing on active transportation and livable cities. Active Living Photography is the stock photography company I created to curate and distribute fine photography supporting urban journalism.